Maxillofacial Prosthesis: All You Need To Know About It

Maxillofacial prosthesis is a relatively new, but possibly the fastest growing branch of dentistry in recent times. It has become essential to thousands of people who had to lead a life of broken self-esteem and the feeling of being shunned or deemed unattractive because of some distorted facial features. As in a clinical process, the maxillofacial prosthesis is the rehabilitation of patients with defects or disabilities that they were either born with or developed because of a disease or being subjected to trauma. This may lead to the patient feeling crippled and having problems in doing some daily and essential functions like speaking properly. Prosthesis thus may be useful for the patients both for physical and psychological reasons. This process would help affected patients regain their sense of confidence and thus lead a much better and normalized life. Most dental clinics in Mumbai offer the availability of maxillofacial prostheses, and patients in need are urged to immediately ask for this procedure.

Prostheses in dental clinics in Mumbai are used mostly to replace missing areas of bone or tissue in the facial region, as well as correct and restore oral functions like swallowing, speech, or chewing which might have been hampered because of the missing tissues. Patients may opt for maxillofacial prosthesis because of psycho-social reasons as well, this includes correcting the structural defects of the palate or any part of the oral correction regime aimed at restoring proper speech, curing cleft palate, or any other trauma caused damage to the tissue in this region. Prosthetic devices are used in dental clinics in Mumbai as a means to provide positioning or shielding to facial structures during potentially dangerous circumstances like radiation therapy. This is essential because the soft tissues in your facial region may be adversely affected by the harmful radiations and lead to further degeneration and damage.

Demand for a maxillofacial prosthesis in dental clinics in Mulund

Maxillofacial prosthesis acts as the cure for many problems at once, which is a huge factor behind its prominence as an all-around medical procedure for oral health. Maxillofacial prosthesis, for example, is also used by dental clinics in Mulund for people who are in need of prosthetic care due to suffering from some kind of neuro-muscular disease like ALS or a stroke. Sometimes these problems can be present in a child right from birth due to wrongly formed or underdeveloped facial tissues. Some of these problems include cleft palate, missing or unformed teeth or tissue, or any kind of situation which would require specific medical care. Maxillofacial prosthodontists in dental clinics in Mulund are experts in the process of curing and restoring the removed or damaged tissue and bones of their patients and work in accordance with a large team of supporting doctors like ENTs, neurologists, speech pathologists, anaplastologists, and others who might be needed for any kind of follow up based work. Maxillofacial prosthodontists in dental clinics in Mulund also perform corrective surgeries like altering the palate for enabling speech in case of palate damage, replacing portions of the jaw that might have been lost, and restoring gums and teeth.

Maxillofacial prosthesis thus aims at making lives better for all patients, by giving them a perfect smile as well as renewed self-confidence and happiness. 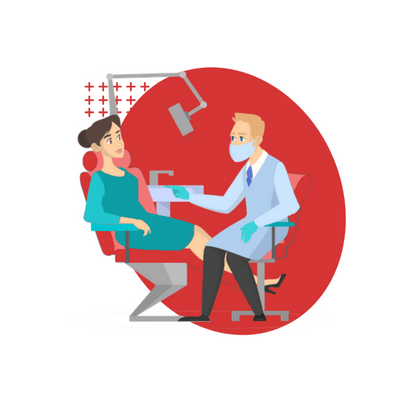